Writing Two Books at Once: Yea or Nay?

It was sometime after I'd finished one of the later drafts of Sentencing Sapphire (Coming out Oct. 6;Yay!) that I started a new book, no, my first book outside of the Sapphire Dubois Series. The 3rd Sapphire book was at an editor's, and I had some time on my hands, so I dove into a novel I refer to as Project X.

In all honesty, I wanted to take a break from the world of blood, murder, and psychos after I finished Sapphire #2. However, the schedule didn't allow it.

So, after my dear agent had read and approved Sentencing Sapphire, I told her: "I need a break from the series, or I will go crazy and it won't be any good." It had less to do with spending too much time with my MCs, and more to do with spending years sitting down to write every day and having to imagine, what is this serial killer thinking? What's his motivation? How does he feel when he kills? After a while, it took a toll on me.

Project X is not only serial killer free, but it's also more light hearted in many ways (in other ways not.) When the contract for the final books of the Sapphire Series came up, I was obviously elated, but I asked for extra time, because again, I needed that break. Thankfully, they were kind enough to give it to me.

Somewhere along the way of writing Project X, which I was SO committed to, I started missing Sapphire and her world. What could be the harm, I thought, in writing the first chapter just to see how it goes? Four chapters later, I stopped and looked at the page count in surprise, unsure of how it came to grow so much?

So here I am, writing two books at once. As I spend every other day bouncing back and forth between the two books, I'm wondering if it's actually a good thing for the mind or if I am, in fact, driving myself more bonkers this way than what I was doing before.

The only way to find out? Make the list.

Pros & Cons of Writing Two Books at Once

Pro: Less Pressure
Writing two books actually seems to take the pressure off both of them. Without the self-imposed pressure we writers so often put on ourselves, my mind seems less bogged down, resulting in a creativity spike.

Con: Double the Story, Twice the Memory Loss.
Usually, I will glance back at what I wrote the previous day before starting to write again, just to get into the story again. But when writing two books I have to re-read everything, every single paragraph, to have total recall. I also find myself having to go back chapters to check facts again and again.

Pro: Double Material
As a writer there are two questions you'll constantly get: What material do you have, and when you will have more? At the end of the two-book journey, you should have two manuscripts ready to go out, making everyone--you, your agent, your publisher, your mom--happy.


Con: Time Constraints
Being in contract for one of the books, obviously makes that manuscript priority. There is no way around it. Though I'm miles away from my deadline, I still feel guilty working on something out-of-contract and there's this little voice in my head constantly reminding me how much it sucks when I'm rushing a MS toward the end of a deadline. This could be a HUGE problem.

Pro: Getting a Break 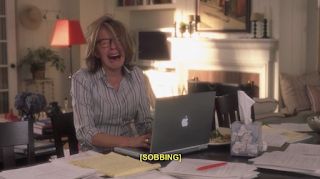 Once every so often, and by that I mean all the time, I run into a wall where I have painted my character into a corner, and I have no idea how to get them out of it...yet.
Instead of spending all my time crying: "Why? Wh-hy-hy?" to the sky like I normally do, I
now move over to the other story, until the answer comes to me. This allows me to be productive where I would normally have wasted time bawling.

Con: Devotion
Can you really be a 100% devoted to a story when you're only giving it 50% of your time? I don't know. I feel fully devoted while working on either project, but only the end result, which I'm yet to have, will answer that question I'm afraid.

Pro: A New Process.
This is normally how my writing process works while writing one manuscript over, let's say, a year.

As you can see, the middle chunk is tedious but, it also tends to be the calmer part of the process. On the flip side, writing a rough draft or pushing out those final changes before the MS is due, can be heaven or hell, or sometimes both simultaneously. Working on two novels allows me the exciting thrill of writing a rough draft one day, and to break it up with some tedious rewrites the next. I can go through Hell on Tuesday, and recoup in the calm waters of rewriting on Wednesday.

Conclusion: At the end of the day, I find that the Pros outweigh the Cons. This, of course, comes from the POV of someone who is yet to conclude the new process. It all depends on how I'll cross the finish line in the end.
Should I come out of this looking neat, squeaky clean, and smell slightly of lavender, I will definitely keep this new way going.
But, should I come out of this like a person emerging from a war zone with blood on my face, torn, dirty clothes, and reeking of death and self-hatred, I will go back to the old process and only do one novel at a time.

Truly, and as with most things in life, only time will tell.