Ah, summer. What better time to crack open a new book than at the beach, the pool, or on the couch... with the curtains drawn shut...and the A/C blasting.

Like so many people, my reading excels during the summer. Not because I have vacation time, mind you, but because when it comes to the dog days of summer in this part of the U.S, the heat is neither great-fun-in-the-sun nor welcomed. There are times when I step outside and get blasted with a wave of sizzling 105-110 degrees, and simply say, "Screw this." Then I step right back inside and decide to stay there until the weather comes to its senses and drops to the 90s.

For me, this is the optimal time to do two of my favorite activities that are right up there with sleeping, eating, and breathing: Reading books and binge watching Netflix.

So what is on my favorite reading and binge watching list this summer, you ask. No? Well, I'll tell you any way.


The Woman Who Stole My Life by Marian Keyes
I grew up devouring Marian Keyes books and her latest novel did not disappoint. The MC, Stella Sweeney, may be my favorite Keyes character of all time...besides from Mammy Walsh, but, if you too are a Marian Keyes-er, you know that goes without saying.

Penryn & the End of Days Series by Susan Ee

I stumbled upon the first book of this dystopian YA series a while back, and just now got my hands on the final book: End of Days. I literally had to limit myself to a few chapters a day so I wouldn't gobble the whole thing up, and rather savor the story the way you slowly sip an excellent glass of wine.
People sometimes commend me for pace, but Ee has pace down to a T. The series has great plot movement, character arcs, and, for any other writers out there, makes for excellent study material. 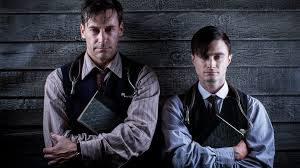 I didn't know what to expect starting this tiny series, and I can't remember what it was that made me click on it, but one morning, and by morning I mean late night of writing for me, I closed the lap top and pushed play around 4 a.m.
The writing is surprising and the blend of darkness and humor borders genius. The task of making humor out of a scene that involves a dying child, whose leg is being sawed off, should be impossible. But, somehow, they pulled it off, and do it well.

I got interested in watching this after I heard the show was "controversial." It took me about two of the half-hour episodes to get into Derek, but once I was in, I was in. Ricky Gervais, the creator and star of the original, British, The Office, has rebooted his mockumentary scope, this time with the setting of an elderly home. I think the engine of the show is supposed to be humor driven, as it marches to the beat of its predecessor's drum, but what actually keeps me playing the next episode is the sad, realistic undertone. The critics seem to have focused so much on Gervais' performance, that they might've missed the reoccurring themes that bring up essential societal question, like, how the elderly are treated, both by budget-cutting suits and their own family members, and how the staff, a group of "outsiders", are viewed and even mocked by society.

I don't think this show is everyone's flavor but I, for one, enjoy its heart.