In honor of writer's vent-day on Twitter, I'm re-sharing Tuesday's shenanigans. If you're a writer, you'll feel right at home with some of these. 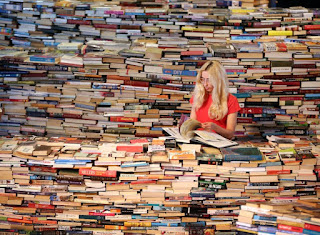 I have a part time job where I meet a A LOT of people everyday. I usually don't offer up that I'm a writer. However, sometimes they ask questions that forces me to admit to it, like, why did you come to the States? (writing.) What do you do for fun? (writing) What did you go to school for? (writing) How did you meet your husband (writing.) You get the gist.

But there are also many questions that I answer with a wishy-washy shrug, a face that says ask no more, and a mumbling: "I have second job, kind of, where I work from home." After I do this, 99% of the time, people ask no further. And it's not a lie per se, so it doesn't make me feel dishonest. But as it turns out.... my magical answer is not so magical after all.

I was at my new job, which is exactly the same as my old job, and a few of my bosses were standing around.
"If you do this, this, and this, you'll eventually get full-time here," one of them told me.
"Oh," I said, "I don't want full-time."
"Why?"
They stared at me and I reached for my wishy-washy, ask-no-more, mumble: "I have a second job, kind of, where I work from home."
Silence....then the boss who asked in the first place says, "So...internet porn?"
"WHAT?" I yelled. "Is that what people think when I say that?"
"Well..." they nodded in unison. "Yeah."
No wonder people asked no further.

You may ask why I'm so reluctant to tell people I'm a writer. Well, after four years of receiving the answers from below, I'd bet my bottom dollar, you would be too.

#TenThingsNotToSayToAWriter "You should try to get on that list they have in New York. The books on it do real well."

Mia Thompson ‏@Mia_Thomp Jul 28  #TenThingsNotToSayToAWriter "I've led an interesting life. You should write a book about me."