A Swedish Christmas: not for amateurs

After a long Christmas Vaca in Sweden, I'm back in the States...physically, at least. With the 9 hour time difference, 48 hours of no sleep, and 3 never ending 'I'd-rather-kill-myself-than-sit-here' plane rides, it's safe to say I'm massively jet lagged. I've experienced some difficulties communicating like a normal human being and frequently find myself saying things, like: "And then I went on the airplane and flew...you know, in the sky." Or, "There's something yellow in the middle of my egg."

While the Americans' looks of: you-should-be-medicated, aren't pleasant and the memory of the airplane ride, where I got fondled by a Ukrainian woman who seemed to have a sleep version of Alien Hand Syndrome, was slightly traumatizing, the trip was worth it.

I got to spend two weeks with my family who I love, but don't get to see very often and I completely dove back into the culture I grew up with. 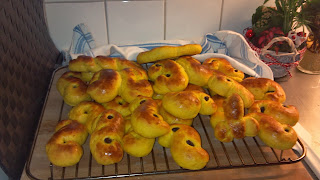 I joined my mother and sister in the traditional Swedish holiday baking of "Lussekatter". I read the traditional text and lit the fourth Advent candle (something my sister and I have never done, but somehow decided we've always done). I dutifully watched Donald Duck a 3 p.m. (the equivalent of the Americans' A Charles Brown Christmas tradition) and pretended not to be bored.

Though the time away from my home land has made me love and appreciate the Swedish traditions more than ever, it's evident that there is a new, more Americanized side to me now.

As I've mentioned in a previous post, one of the major Do's at the Swedish Christmas table is schnapps, and a lot of it. Each adult gets a shot glass by their plate and once the dinner starts, that shot glass is never empty. No matter how many times you down the schnapps, someone will refill the glass before it touches the table again. Should you at anytime not take your schnapps, OR grimace at the burning bitter aftertaste, you are to be laughed at and friendishly ridiculed by your company. This Swedish tradition is NOT for amateurs, and this...is where I faltered.

As an 18 year-old (the Swedish legal drinking age) I had no problem with this tradition. I'd take every schnapps and hide my grimace no matter how badly my throat burned. But after seven years in America--where I've focused more on writing than drinking--I've become soft. I've grown accustomed to not being plastered on Christmas Eve and Christmas Day.

When it was time for the first schnapps, I could not bare to down it. I couldn't even bare to down half. I took a sip, yes, a sip of the shot...and grimaced. 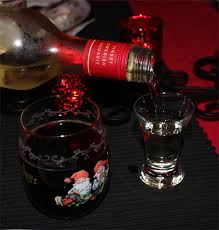 This was, of course, noted and the laughs and jokes about my unpatriotic wussiness filled the room.
After repeating my sacrilegious sip at the second schnapps, and receiving even more ridicule, it dawned on me: my American years hadn't only made me sensitive to alcohol, but also made me a bit of a rebel. When someone later called for the third schnapps, I forgoed the shot glass completely and grabbed my girly wine glass instead. I raised it, higher than I've raised any schnapps, and joined the cheer with pride.

With my Christmas vacation behind me, and the third Sapphire book in front of me (yay!), I was happy to come home and lay my jet-lagged eyes on this big box. Though I'm fairly certain it wasn't from Santa, but actually Diversion Books, it felt like it. 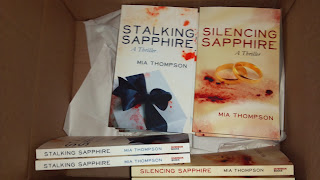