Garrett Calcaterra is author of the YA fantasy series The Dreamwielder Chronicles. His other full-length books include The Roads to Baldairn Motte and Umbral Visions. When not writing or 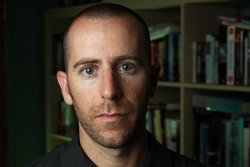 teaching, he enjoys playing guitar in his band Wheel House, hiking with his two dogs, quaffing good beer, and enjoying life with his wife and best friend, Mandy.

Souldrifter, the sequel to your YA fantasy, Dreamwielder, just came out. On a scale of puking-your-guts-out nervous to Tom-Cruise-on-Oprah’s-couch ecstatic, how do you feel?


Definitely more excited than nervous, but not nearly as excited as when the first book came out a few years ago. What I learned from that first one is that it’s a lot of damn work to market and promote a new book as an unknown author. So I’m excited, but also determined to put all the work in to make sure readers actually hear about the book.


You’ve been doing a book club on Wattpad for Dreamwielder. Since the comments on Wattpad come in unedited, has anything the Wattpad-ers said ever shocked you?


Ha! You know, for years I’ve taught creative writing to high school students who tend to be very blunt, so I don’t think any comment could shock me anymore. And the readers on Wattpad have been great. For the most part the comments on my work have been overwhelmingly positive. Wattpad readers compare my writing to George R.R. Martin’s A Game of Thrones quite often, and a few weeks ago, someone even compared my writing to F. Scott Fitzgerald’s. Can’t complain about that.

I do indeed have two dogs. Their real names are Jager and Jack, but I like Biscuit and Bob Hope, so let’s stick with that. And yes, they absolutely demand my attention. Jager…er Biscuit rather, will nuzzle me under the arms to knock my hands off the computer keyboard, and then he’ll put his front paws on my lap. He’s a big dog, a little over 100lbs, so you can’t ignore him. Jack, aka Bob Hope, will just bark at me when he wants to go for a walk, and he’s bigger than Biscuit, so yeah, his bark rattles the walls.


Being an author of horror as well as fantasy, have you ever scared yourself so badly that you: A) Had to stop writing. B) Peed a little. Or, C) Turned on all the lights and grabbed Biscuit and Bob Hope for protection.
I’ve definitely been known to cuddle with Biscuit and Bob Hope when I’ve had a few too many drinks, but I don’t get scared all that easily, probably because what plays out in my imagination is way worse than anything that happens in real life. Ever since I was a kid, I’ve been a daydreamer, playing out imagined scenarios in my mind. That’s why I became an author, I guess—so I can bring those daydreams to life.


Do you remember where you were, what you did, and whether or not you were wearing an actual Thinking Cap when you came up with the idea for Dreamwielder?


Actually, it was my mother who came up with the concept for Dreamwielder. She literally dreamt of a young woman sleeping in an opulent castle whose parents were trying to beat down the door, and when they finally did break through and wake her, the castle disappeared in a wisp of fog to reveal a hovel. My mother told me about this dream when I was visiting for the holidays several years ago and it really resonated with me. My imagination took off where hers started and that dream became the opening scene in the book. 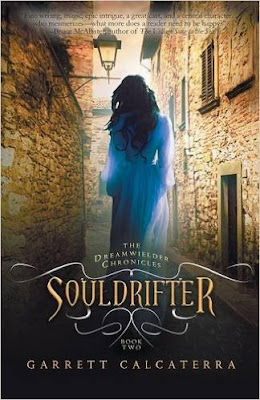 Well, Biscuit and Bob Hope are getting pretty old, so they mostly sleep all day and give me moral support while I write. For my part, I have several projects in the works. There will definitely be a third Dreamwielder book, and then I’m working on something that’s a little darker and geared more towards adults. It’s still in the early stages, so I can’t divulge too much since I don’t know myself, but it’ll be more high-concept than the Dreamwielder books, yet have the same break-neck pacing and action. At least that’s what I’m aiming for.

A BIG thanks to Garrett for allowing me to interview him! To check out Garrett's novel Dreamwielder and its sequel Souldrifter click HERE
Posted by Mia Thompson at 1:32 PM