I revenge write from time to time. Hell, I've even revenge written for other people (see Sacrificing Sapphire, out on December 12.) As a writer I work things out consciously or subconsciously through my writing, and revenge writing, I suppose is a part of that. It's seems, to me at least, like a very healthy way of dealing with issues that would otherwise have remained unresolved. And, since it's just storytelling, revenge writing, isn't something that ever comes back to bite you in the ass. By all means, it's absolutely bulletproof.

The first time I found myself revenge plotting (I always revenge plot before I revenge write, otherwise it leads to too much revenge editing) I had been in a long-running argument with my husband about...actually, to properly tell this tale of love and hate--mostly hate--I have to take you back to its beginnings.

I was studying Screenwriting in Los Angeles at the time, and was involuntarily crushing on a guy in my class. It was involuntary because the last thing I wanted at that time was to be distracted by anything unrelated to writing. Nonetheless, I was crushing hard. So hard that I was too mesmerized by his charming smile and bright blue eyes to notice what was on the black T-shirt he wore every once in a while.

I was now married to my crush, and though I was still mesmerized by his charming smile and bright blue eyes, I'd become well aware of what that black T-shirt, with the bold white letters, stated:
I don't take shit. I don't give shit. I'm not in the shit business.

Not that bad, right? The slogan moderately annoyed me, but it could've been worse; he could've owned one of those FBI - Female Body Inspector shirts.
But the more he wore this shirt, the more it annoyed me. He wore it like it was any other shirt--to the movies, the grocery store, and once to a fairly nice restaurant in Beverly Hills. I'm generally not one who cares that much about how one should look, act, and speak, but this shirt was starting to rub me the wrong way. Every time he put it on I started feeling as if the shirt, along with its now majorly annoying slogan, initiated a Eastwood-like stare down, while singing I'm ba-aaack.
Over the coming years, my relationship with the T-shirt went from dislike, to detest, to hate. And my husband really couldn't see what my problem was.

I was in the middle of my initial bout with writing my first novel, Stalking Sapphire, in which the male MC, Aston, starts out in the series as an assh**e. As I sat there typing away, the thought struck me and my fingers froze momentarily over the keyboard. What would an asshole wear, if not THE T-shirt hanging in the closet at that very moment, silently mocking me.
I saw it all play out in my mind's eye. It was top-shelf vengeance. I would write the novel, and one day so many people would read it that when my husband and I walked down the street, readers would stop me and say: "Gosh, that really was one terrible T-shirt in chapter 6."
After which my husband, who may be the most stubborn person on earth, would look at me and say, "Yes. I can see now. It is the second worst T-shirt (the first being the FBI one) since the history of T-shirts. Let's BURN it."

Yes! I thought and smiled, that was exactly how it would happen. And then I typed.

The T-shirt in question mysteriously (eh...) vanished while I was doing laundry.

Stalking Sapphire got published earlier that year, and had just been put up on Wattpad because its sequel was coming out. For those who don't know, Wattpad=online Mecca for readers and writers. After a few months on there, and right around the time Stalking Sapphire reached a million reads, I decided to shut off my comment notifications to save my email inbox from filling up.

A couple weeks ago, I went into Wattpad to check on something and ended up at the beginning of chapter 6 of Stalking Sapphire. That's when I saw them, the amount of comments that had been filling up over the past four years, all centered around this dialogue cluster.

My fantasy had (kind of) come true. I was Thrilled! Ecstatic!  People hated the shirt just as much as I did. Practically radiating with gloat, I clicked on the comment bubble and waited as the page loaded, the way Ralphie waited for the secret code to be revealed in A Christmas Story. The moment the comments appeared I would run up to my husband while pointing and yelling: "See! Seeeeeeee!"
After which he would immediately admit that yes, it was a terrible shirt, and it was a good thing it mysteriously (eh...) vanished in the laundry.
As the comments appeared on my screen, my victorious grin tapered off. The longer I scrolled, the further the corners of my mouth dropped, until finally, I looked like the saddest of all emojjis.
Here are just a few of the comments I saw: 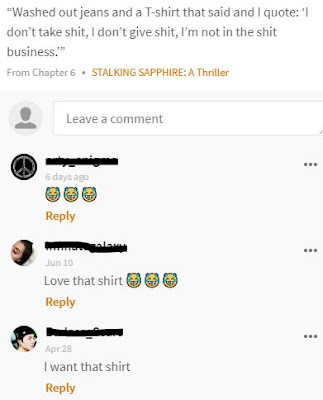 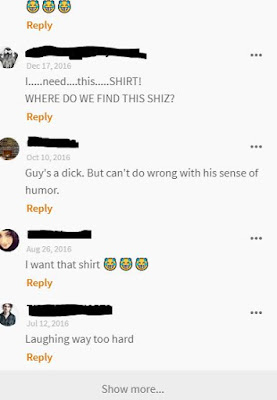 They all loved it. My husband's shirt had not gotten a single negative comment. What else was I wrong about, I wondered. Did red and pink not really clash? Was the ending of Dexter not actually terrible? My way of viewing the world could be completely upside down.

"What?" my husband asked.

He squinted. "What T-shirt?"

"Come on, the T-shirt. The one that mysteriously (eh...) vanished  in the laundry a few years ago."

"The one that I hated so much that I wrote about it in my book..."

"Haha! Right...hilarious," he laughed, then his eyes grew wide with excitement, and he reached for his phone. "I wonder if I can find it again!"

So...lesson learned. Will now proceed with revenge writing more cautiously as it appears not all of it is as bulletproof as I once thought. It seems it may actually come back to bite you in the ass after all...even if it's a decade later.